On using privilege to combat racism: a love letter to #educolor, from an aspiring ally

It has been inspiring this past week to watch my young fellow Princetonians confront the legacy of institutional racism that is quite literally etched into stone at my well-intentioned, sometimes clueless, but deeply beloved-and-worth-improving Princeton (link).  Cornel West captured my feelings well with his support.  It is possible to love an institution and, because we love it, want it to grow and improve our society and our world.

It has also been quite moving to watch my Princeton classmate, University President Chris Eisgruber, as he wrestles with these issues in the public eye, working through layer upon layer of unconscious white privilege and commitment to anti-racist education. It has been impressive to see him come through it with open-mindedness, wholeheartedness, and a willingness to listen deeply, responding with integrity, and widening our commitment to inclusiveness at an institution that has not always supported inclusion. This is what I consider to be "Princeton in the Nation's Service."

So it was utterly disheartening to wake up this morning to a hate-filled screed on our Princeton Class of 1983 Facebook page from a different classmate of ours — a white woman who is a hedge fund manager on Wall Street. She was a leader at one of the hedge funds that nearly destroyed our country's economy. She and those she worked with have never been called to account for their crimes.

But first, a warning. Please note in advance that I strongly condemn this kind of hate speech. But I believe that hate speech needs to be called out because I believe it has no place in the power structure, much less in civil discourse. I also believe hate speech deserves no shielding or privacy. I wanted to capture these publicly-expressed pieces of hate speech before she could think better of it and delete them.

She wrote, "Churchill: 'You were given the choice between war and dishonor. You chose dishonor, and you will have war.'"

The she linked to the following truly reprehensible article (WARNING: this article contains contemptuous and morally disgusting attitudes that are blind to their own privilege. You may be as sickened as I was when you read it. I strongly condemn this hate speech): hate speech article link

Another classmate pushed back against this right away, writing,


as Eisgruber said “we should be aiming for a campus in which all students feel equally welcomed.” Commentary like the above and related blog posts are unwelcoming and also inaccurate (for instance saying all the students protesting at PU were black). There are many students, and people, of diverse colors and backgrounds, who support taking a hard look at campus life and assumptions. At PU there is a high value for tradition and a high value for making changes that make the educational experience the best that it can be.

But this woman kept on going with her racist rants. She lashed back.


I am quite prepared to believe that the BLM hysterics come in all colors. Their insistence on Maoist reeducation of their peers is a uniform pink.


Nothing says "welcome" like a mandatory Maoist reeducation program. Unless it's a building that you cannot access due to the color of your skin. Not to mention the black students who may not want to self-segregate -- if there is a component of pure evil to this profoundly racist and anti-educational movement, it is the pressure it will put on sane black kids to conform to the madness of the Maoists.

I could not believe my eyes, except that I spent four years with this woman and her entitled, privileged bullshit, so this was not the first of her objectionable ravings that I have been subjected to. Still, we are supposed to be older and wise. But apparently not everybody is actually committed to growing up.

The classmate who pushed back against her ravings wrote back:

That's your view and I am unlikely to influence it. However, I am quite prepared to think that the outcome will be orange and black, and not pink. And that there are apparently "hysterics" in various quarters. Just sayin.

This racist with a Princeton education could not stop herself, so she went on:

Except that if you're orange you can't get into the new "cultural" Affinity building.

Maybe Princeton should be renamed "Wilson University" to honor the new segregationism.

I couldn't take it any more, so I posted a reply objecting to her hate speech. But predictably, she screeched right back at me:

I hope that nobody would be surprised to find me pro-First Amendment and anti-Maoist. But you are welcome to a participation trophy anyway.

This is the voice of someone who benefited from a world-class education, as well as from our open, inclusive, and welcoming immigration policy. It causes me a deep and lasting sadness that these are the values she took away from these uniquely American opportunities and institutions I hold so dear.

When people reveal their true values in public, it is important to document and witness their doing so. It is also important not to let this kind of evil go unanswered. The witnessing function is one of the most important roles of an ally. So I am doing my best to do so here, however imperfectly and stupidly I may be doing it. I continue to grow and learn from my #educolor colleagues on Twitter and on blogs. And I am training my students for their roles as the leaders of the rebel forces.

As the Buddha said, "Hatred never ceases through hatred but by love alone is healed. This is an ancient and eternal law."

And as Michelangelo wrote on a scrap of paper left behind in his studio in the wobbly handwriting of his old age, "Ancora imparo" — "I am still learning."
Posted by cheesemonkeysf at 11:34 AM 3 comments:

I have HAD IT with bogus PD.

As usual, there was a lot of warm and fluffy language about finding things that different students had shown us in their pieces of worksheet work that they are "smart at," but nobody mentioned the elephant in the room — namely, that students were not demonstrating any form of active engagement with the actual problem situations at hand. 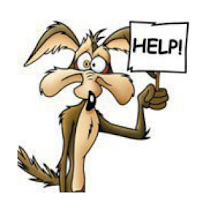 Instead, all the pieces of student work that had been lovingly curated and assembled by respected professionals to showcase student smarts merely showed students blindly whipping out one procedural method or another and just guessing. Not guessing and checking, mind you. Just guessing and getting stuck. Or plugging values into the quadratic formula but forgetting where the negative sign goes. Or trying to factor or complete the square, but making minor but fatal computational errors.

Where, I kept trying to ask, is the sense-making???

Now, don't get me wrong — I know that kids are smart. Very smart. And these kids clearly understood that they were being measured on whether or not they slapped numbers into the quadratic formula or came up with enough lines' worth of symbols to create the appearance of the desired forms of problem-solving.

Unfortunately, that also meant that they clearly understood that, if they had taken the time instead to write out words, phrases, or whole sentences; to challenge the diagram by drawing a different diagram; or try to figure out what variables in the text go with what parts of the diagram, they were going to get marked down. A lot.

These thoughts left me wondering, where are these kids being challenged to engage in sense-making?

This has been on my mind a lot lately because over the past week, we've been working on systems of linear equations in Algebra 1. Textbook explanations simply suck. They are vast, multi-colored makeup experiments on dogs wearing bandannas, with slashes of red and blue arrows pointing everywhere and nowhere.

Textbook explanations do active harm to student reasoning and sense-making. 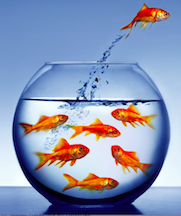 We needed to escape from the textbook.

I did a lot of thinking and reflecting and being willing to ask stupid questions over the course of a week and I came to a few important realizations. First of all, there are only three main categories of linear systems problems that show up to torment Algebra 1 students: (1) upstream/downstream problems, (2) mixture problems, and (3) number and digit problems.

So I decided we would take some time to work our way through the sense-making aspects of each of these types of problems. If nothing else, at least my students would have some skills for actively making sense of the crap we throw at them. But at best, they would have tools to connect their mathematics to their beautiful, intuitive common sense about the world around them.

I was rewarded after today's test with smiles and much more confident statements of belief by students about their own increasing success. 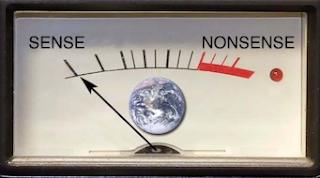 All of this has confirmed my newest hypothesis, which is as follows:

if I'm not teaching sense-making, then I'm not actually teaching modeling.

The process of decoding and translation and re-encoding into symbolic form was so powerful for my students that I felt a need to document it for myself, so I do not forget or lose sight of this fact. I discovered that, if I spend time working through guided interpretation and translation of situations as a means of scaffolding the up-front part of the modeling process, it pays us all dividends in student engagement and clarity and success.

Here is how we started.

From working with the Exeter problems, I have learned that it is very helpful when you remind students of what they already know. It is particularly helpful to remind them that these are all based on d = r • t .

r is the trickiest part here. It consists of two elements: (1) the protagonist's basic speed, which I declared to be "b"— "b" for "basic speed." There is also the idea of (2) a current (air, water, wind, whatevs), which I labeled as "c" for "current."

The secret of these problems, my students explained to me today on our test, is figuring out what the relationship between b and c is. Is c helping the protagonist's progress... or is it hurting?

"Helping or hurting?" over and over again as we modeled different situations.

This required a lot of small-group and whole-class discussion and work on vocabulary. We made a word board (we don't have a whole wall):

Once you figure that stuff out, you can make a table. 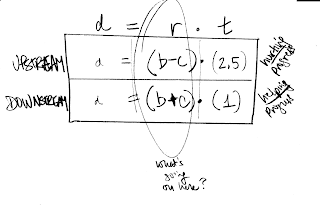 And at this point, students can usually build their equations and solve with minimal help. But they really need some scaffolding and guidance about how to take their common sense and mathematical understanding and bring this modeling problem to the next level, where they know what to do.

I was wracking my brain until my colleague Robert said, "Oh — I just draw it for them this way:" 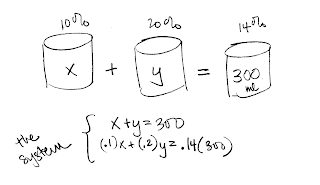 Sometimes a simple solution is the best.

The hardest part of these is organizing the given information and identifying what you want or need to turn into a variable.

STEP 1: Name the numbers (I use capital letters A and B to start with)

STEP 2: Rewrite A & B using your knowledge of place value

STEP 3: Revisit the problem and reinterpret the information in light of what you have organized.

STEP 4: Substitute what you figured out in Step 2 into Step 3

Can you divide through by 9?

STEP 7: What was the problem asking for — digits or numbers?

Posted by cheesemonkeysf at 7:52 PM 4 comments: