I am still drowning in papers to grade, but I wanted to write a quick post before the week got too far away from me. I had my first-ever bomb threat this past week, and it rattled us all.  I grabbed my iPhone, my MacBook Pro, and my math pencil and escorted my class out of the building.

I had to make my way home with no keys, no purse, and no money. Just carrying my iPhone and my laptop and my trusty math pencil.

As I battled public transit to make my way home (with no money – just explaining where I'd been and what had happened), it occurred to me that everybody was going to be nuts the next day. So I started writing some new Talking Points for us to do about the events of the previous day.

One of the things that becomes clear with training and time is that as a teacher, my job is to provide an emotional "container" for the experiences we have in my classroom. I decided to use Talking Points as a way of enabling students to process their experience within the structure we've been building for several weeks now.

My students' responses and respect for the structure blew my mind. And they made it possible for us to lose only one day rather than several. And by Thursday, our classroom community had returned to a steady enough state to move ahead.
Posted by cheesemonkeysf at 8:49 PM 1 comment:

I'm required to teach two-column proofs in Geometry, but having also been trained as an English teacher, this has never seemed like a problem to me. In fact, if anything, the activity I used on Friday seemed to scaffold the process using students' existing knowledge better than anything else I've tried before.

My design process was as follows: because of their ELA and writing backgrounds, students already know far more about constructing an argument in words and statements than we math teachers often give them credit for knowing. All the major writing curricula, such as Jane Schaffer and Six Traits, provide scaffolded methods for teaching students to make claims and to support their assertions with evidence and interpretations that connect that evidence to their claims through interpretive statements. Indeed, the Jane Schaffer method, in particular, has a very lovely scaffolded process (which I've extended in the past) to bridge students' metacognitive processes about their writing, taking them from a place of very concrete thinking to one of considerable abstraction.

So why not use this same kind of process for proof? 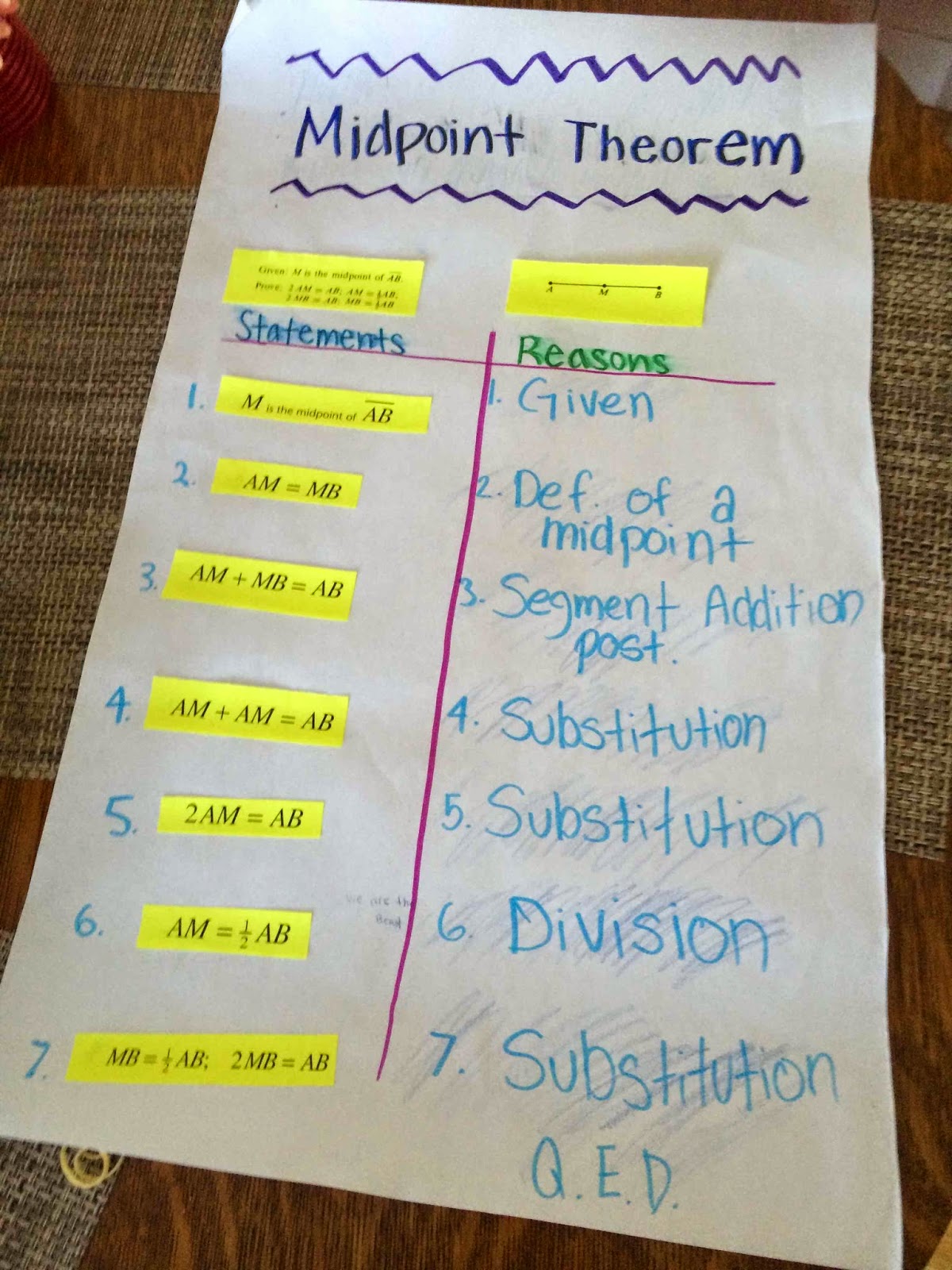 Instead of having students merely "fill in" the reasons for the statements in their first proof (in our curriculum, that's the Midpoint Theorem), I created a task card with instructions and materials for creating a "working poster" (an idea I have adopted from Malcolm Swan) of a two-column proof. They needed to set it up the way we'd done it the day before (two columns, Statements and Reasons), and then they would need to (a) sort their cut-out statements from the task card into a correct order (more than one order is possible), and (b) use their notes and discussions to give the justification or reason that permitted them to make each of these assertions in turn.

The richness of their conversations blew me away. They also confirmed my intuitions that (1) math conversations and projects can indeed draw on students' existing competencies in argumentation that they have developed in their English and Social Studies classes (indeed, many relished the opportunity!), and (b) it is indeed possible to create intellectual need (see Guershon Harel and Dan Meyer) for definitions, postulates, previous theorems, and propositions from algebra through situational motivation. 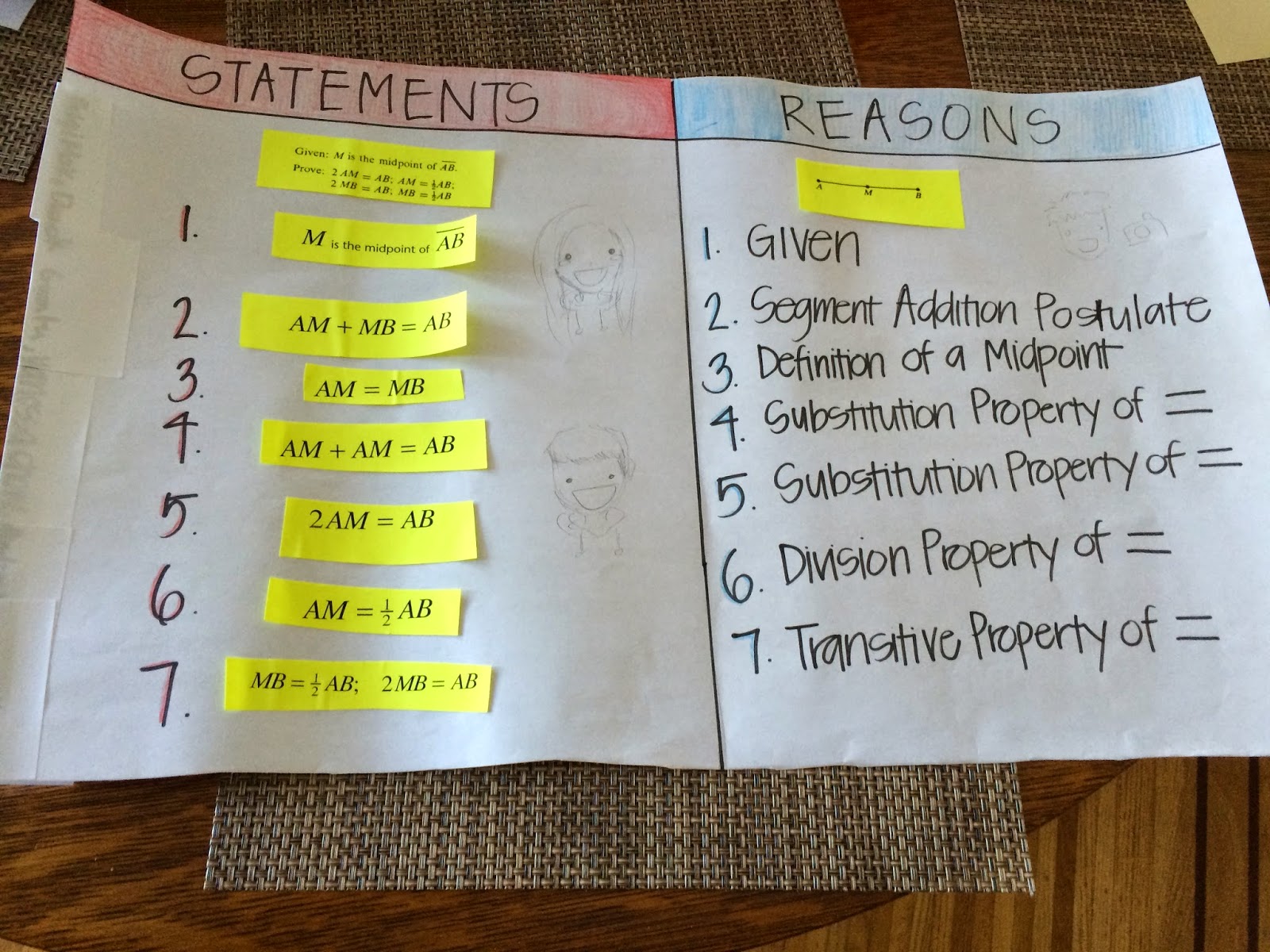 This activity turned two-column proof into a reasoning and sense-making activity that exposed and built on prior knowledge instead of invalidating it; created what Swan calls "realistic obstacles to be overcome"; turned students' notes into a valued and valuable learning resource; and used higher-order questioning, as opposed to mere recall. I realize I have not referenced the van Hiele levels here, but that is, in part, because I think I may be kind of bypassing some of their assumptions. I'm not at all sure about this, though, and I would welcome better-informed thoughts and thinking about this in the comments. 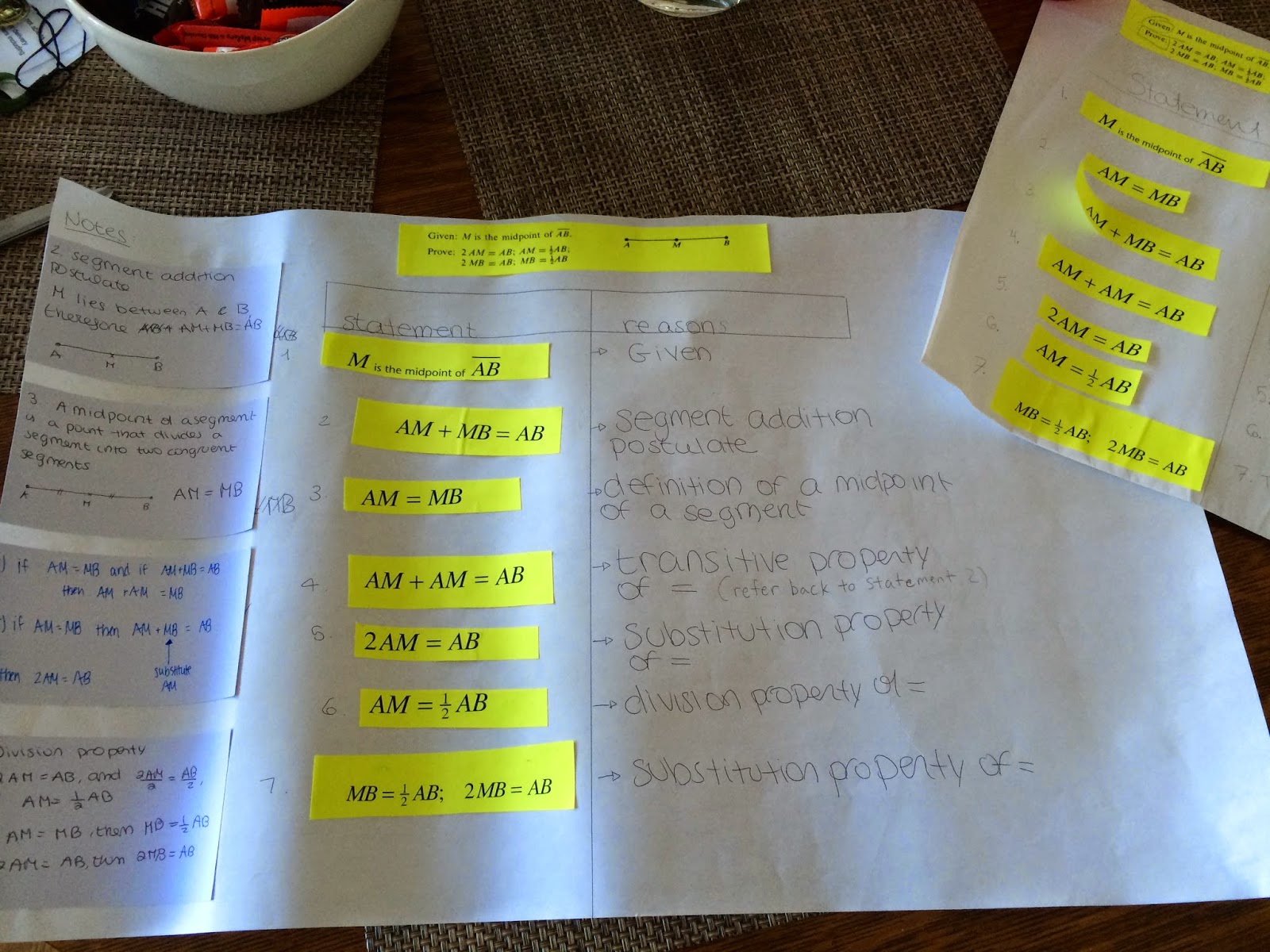 What do you do after Formative Assessment reveals a gaping hole in understanding? More Talking Points, of course. :)

My Geometers took the opportunity to inform me through their Chapter 1 exams that they really don't get how angles are named. So this seemed like a perfect opportunity for more Talking Points, of course. :)

This time I'm giving everybody a diagram of a figure that the Talking Points refer to. They will have to do some reasoning about naming angles in order to do the Talking Points. They love doing Talking Points, but they mostly like coming to immediate consensus. Hopefully this will throw a monkey wrench (so to speak) into those works.

Here is the Talking Points file (they print 2-UP) and here is the set of diagrams (they print 6-UP) to use together for this lesson/activity.

More news as it happens!
Posted by cheesemonkeysf at 8:44 PM No comments: