Cherry Blossom Season in the Classroom

On a morning like this, when I have too many papers to grade, lessons to plan, and comments to write, I try to remember the essential sweetness of this moment in the school year.

It's the season of cherry blossoms in the Bay Area, and I see them coming out everywhere. At first it's just a hint of pink fuzz. Each day on my way home, I marvel at three beautifully restored Victorians that are fronted by a trio of flowering plum trees. On my drive to school each morning, I pass a long hilly driveway lined with cherry trees that form an ephemeral pink outline. Each day this month it has gotten pinker and pinker, and I think to myself, What a brave act to plan a planting that erupts in color for such a brief display. So much care and tending to make sure every tree stays healthy at at the same stage of growth to create this fragile outline that lasts for only a few weeks of the year year.
This is the same feeling I get about my classes right about now. They are no longer forming. They are formed. They just are.
My students and I know each other. And each class has formed a community. Expectations are clear, even when they are not being met. All the roles are in place, and we've been able to loosen up on enforcement of the rules a little bit. Students are now allowed to talk softly during morning announcements and to sit wherever they please while I take attendance. They know my blind spots and view morning attendance as something we are all responsible for together. When I call out, "Where is So-and-So?" I get an immediate response. "He's not here today" or "He's in the Bat Cave," which is our code for hanging out on the floor under the table in the front corner of the classroom where the phone lives.
We have our own dialect and in-jokes that no one else would get. When one of the quietest students says something without first raising a hand, one of the most boisterous students will bellow, "GIVE ___ A DETENTION!!!" And we all laugh. We have a shared history. We all know why it is funny.
Students also know me well enough now to tease me about my idiosyncracies. A student furrows his brow at an unexpected result and another student will call out, "TRUST THE FRACTIONS!"
They know me. They get me. And I get them.
That is how I know we are entering the beginning of the end. This moment is fleeting. We are passing through it just as it is passing through us. And like the cherry blossoms, sooner than I expect, it will be gone, never to be experienced again.
Posted by cheesemonkeysf at 10:24 AM 1 comment:

Put some big, ironic air quotes around that word "winning"

My school is located in a sports-crazy town. It's not just that we are located very close to our major professional sports teams or that many of the players and owners live in our town. It's also that it's a very outdoors-oriented, sports-minded place. Monday-morning conversations about what students and their families did over the weekend always revolve around a list of soccer matches, lacrosse games, swim meets, softball and/or tennis and/or golf games, basketball or touch football games, long recreational or competitive runs, and even some hilarious made-up sports.

Although I am the child of a terrific amateur athlete and major sports fan, I did not inherit the sports gene. In fact, if anything, I inherited the opposite of the sports gene. I love walking my dog and hiking, and I'll do yoga or other health-oriented activities, but I don't care about organized competitive sports. This is probably because I was such an unsuccessful and discouraged participant in sports as a child — always the last kid picked, usually humiliated, never celebrated on the blacktop or the athletic field.

The places where I could compete were always in the classroom or on the musical stage. At our schools, I was always considered a "brain" or a "music kid," which had its own kind of competitive aspects, but not the kind that sports-minded people think of.

So when Sports came up as a Spirit Day theme, I mentally waved it away as something irrelevant to me, something I feel too defended against to participate in. But I knew that the kids would hound me about why I wasn't wearing some sports team's paraphernalia, which meant I had to think about what to wear instead.

On the day of the Spirit Day/Class Competition, I wore my NASA sweatshirt.

When students asked me why I wasn't wearing a sports team shirt, I spoke to them honestly. I told them I'd been a terrible athlete in school and that I had always been made to feel ashamed on the blacktop and on the playing fields. But, I said, there are other kinds of teams and many other kinds of "winning" in this world. And one of the teams I admire most in our country is NASA because, if what they do every day and every year — with little money and constant attacks — isn't winning, then I can't imagine what is.

It seemed to gladden the hearts of my fellow nerds and non-athletes tremendously to have a faculty advocate and fellow traveler in this regard.
Posted by cheesemonkeysf at 1:48 PM No comments:

Standard 7 for the National Council of Teachers of Mathematics measures whether well-qualified math teachers "support a positive disposition toward mathematical processes and mathematical learning." But their criteria and performance indicators don't exactly reach through the screen, grab me by my shoulders, and inspire me to inspire my kids to love mathematics. They seem more like a floor than a ceiling, and personally, my desire is to aim higher than that.

One of the ways in which a positive disposition is fostered is by building a strong and positive learning alliance with my students. In a therapeutic situation, the establishment of a therapeutic alliance is a critical step. The client must believe that the therapist believes in them and in their commitment to change. The great Jungian analyst, teacher, and storyteller Clarissa Pinkola Estés says that nobody can truly accomplish great things completely on their own steam. The same is true for students in the math classroom. When they know in their bones that I am rooting for them, they begin to feel that success in mathematics is possible. That doesn't mean I don't "display attention to equity/diversity" or "use stimulating curricula" and "effective teaching strategies," as NCTM standard number 7 demands. It means that every day, in every way, I try to demonstrate my own commitment to being in their corner and cheering for them.

And so I consider it a wise investment of time and energy to cultivate positive dispositions wherever I can, regardless of a student's success or lack of sucess so far in Algebra, and I see it paying off in little and big ways throughout the year.

One experiment in building positive disposition I've been trying lately is something I ripped off borrowed from Sam Shah -- the use of motivational buttons. Inspired by Sam's lead, I made up some motivational buttons for students to wear during tests: 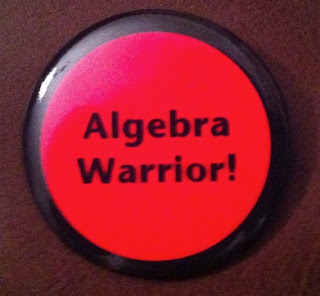 If students wear their Algebra Warrior! button during tests, I give them an extra credit point on the test. I gave these out during our last test and made everybody "take the pledge" to wear their button during tests, including the state standardized tests this year.
Still, I recognize that they are middle school students who can (a) lose anything and (b) easily be distracted even from things that are important to them.
So I was pleased when at least 80% of each class showed up eager to show me that they were wearing their Algebra Warrior! buttons for the test on Friday.
It's a tiny thing, but it's a tangible way of getting them to practice demonstrating their commitment to being impeccable warriors in mathematics. Like warriors putting on armor to do battle, my little Algebra Warriors put on their buttons and remember to form an alliance with themselves — to advocate for themselves and remember that they are connecting with something much bigger than their fear or confidence whenever they do mathematics.
Posted by cheesemonkeysf at 12:04 PM 1 comment: