Life on the Number Line - board game for real numbers #made4math

UPDATE: Here is a working link to the zip file: https://drive.google.com/open?id=0B8XS5HkHe5eNNy10MWZVSDNKNnc

Last year I blogged about my work on a Number Sense Boot Camp, so I won't rehash all of that here. This year I want to give the follow-up on how I used it last year, what I learned, and how I'm going to use it this year in Algebra 1. 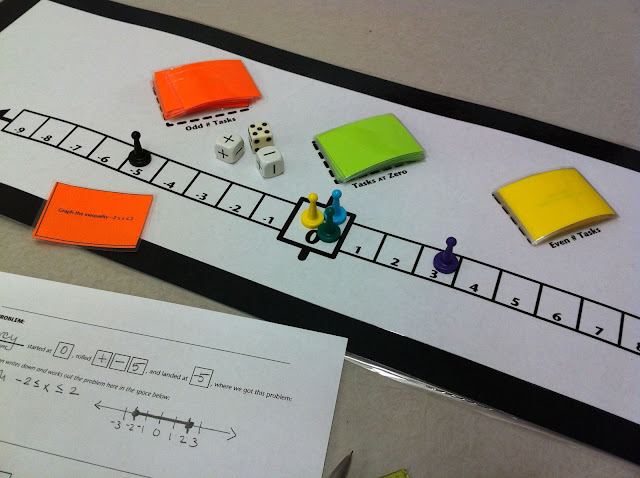 I sure hope I didn't make a bonehead mistake in my example problem!

The most effective thing about this activity was that it compressed a great deal of different dimensions of learning into the same activity, requiring learners to work simultaneously with the same material in multiple dimensions. So for example, they had to think about positive and negative numbers directionally in addition to using them computationally. They had to translate from words into math and then calculate (and sometimes reason) their way to a conclusion. They had to represent ideas in visual, verbal, and oral ways. And they had to check their own work to confirm whether or not they could move on, as no external answer key was provided.

Since they played Life on the Number Line for multiple days in groups of three or four players comprising a team who were "competing" in our class standings, learners felt that the game gave them an enormous amount of practice in a very short amount of time. Students also said afterwards that they had liked this activity because it helped them feel very confident about working with the number line and with negative numbers in different contexts.

I also introduced the idea of working toward extra credit as a form of "self-investment" with this game. For each team that completed and checked some large number of problems, I allowed them to earn five extra-credit points that they could "bank" toward the upcoming chapter test. Everyone had to work every problem, and I collected worksheets each day to confirm the work done and the class standings.

What I loved about this idea was that students won either way — either they had the security blanket of knowing they could screw up a test question without it signifying the end of the world, or they got so much practice during class activities that they didn't end up actually needing the five extra credit points!

Students reported that they felt this system gave them an added incentive to find their own intrinsic motivation in playing the game at each new level because it gave them feelings of autonomy, mastery, and purpose in their practice work.

The game boards were beautifully laminated by our fabulous office aide but do not have to be mounted or laminated. The generic/blank worksheets gave students (and me) a clear way of tracking and analyzing their work. And the game cards progressed each day to present a new set of tasks and challenges.

All of these materials are now also posted on the Math Teacher Wiki.

Let me know how these work for you!

UPDATE 10/27/2016: Here is a working link to a zip file of all the components for this: https://drive.google.com/open?id=0B8XS5HkHe5eNNy10MWZVSDNKNnc
Posted by cheesemonkeysf at 7:57 AM

Posted by cheesemonkeysf at 7:57 AM