Last week of school before the break — and it's FINALS WEEK.

So I've got about 150 finals to score preliminarily, which is why it made SO MUCH SENSE for me to use much of this precious Sunday to make my own version of Sam's amazing personalized planner.

And here is my version: 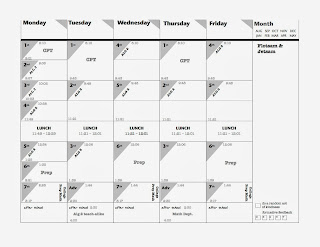 I think this even counts as a #Made4Math entry, although it should probably be listed as a #MadeInsteadOfMath submission. :)

Posted by cheesemonkeysf at 2:40 PM 3 comments:

This was my first week in my new school, which means I've been going through a few simultaneous transitions: (1) from middle schoolers to 11th and 12th graders, (2) from a 15-mile commute to a 1.5-mile commute, and (3) from a high-performing to a very diverse, high-need school.

I could not be more excited.

This first week was challenging because my partner-teacher and I were making a transition we could not inform them about fully until the end of the week. Also, he is beloved, which makes him a tough act to follow. But he is also my friend, so it was good, I think, for the kids to see that even math teachers have math teacher friends and that we are working hard to support them in a difficult transition. We did a restorative circle with Advisory so that everyone could be heard in the process of leave-taking, and we will do a round of circles with everybody tomorrow, Monday, to acknowledge the transition and to embody the process of support.

Our talking piece for circle practice is The Batman Ball — a small, inflated rubber ball with Batman on it that moved around the circle as each participant expressed his or her feelings about our shared situation.

What really struck me was their honesty and their authenticity. They honored the circle and each other. And they were willing to give me a chance. I know I will probably receive some of their displaced frustration and feelings of abandonment over the next few weeks, but they were making positive, honest effort that was moving to witness. For the guys in the class, it was especially hard. Most of them have at least one strong female authority figure in their lives, but for many of them, Mr. T was it — their one adult male role model: a young, whip-smart, kind, funny, warm, math-wizardy hipster with oversized glasses, a ready smile, and a heart the size of the ocean.

"Meetings end in departures," the Buddha said, but the fact that it's true doesn't make it any easier. They're still here, and now with me, but their hearts are going to be hurting for a little while. Plus we have finals coming up.

The other thing that made me happy to see was that they are incredibly capable math learners — more capable than they realize. Our department uses complex instruction pretty much exclusively, which was one of the reasons I really wanted to teach there. These gum-cracking wiseacres some of whom live in situations which are hard for most of us to imagine will sit their butts down in their table groups and do group work. I mean serious, collaborative mathematics.

The fact that they don't yet believe in themselves is a different problem. But that is a workable problem too.

My classroom is across the hall from the Special Ed department's special day class, and they are generous with their chilled filtered water and holiday cheer.

So tomorrow is another new beginning. I am trying to stay open and to notice and not to hesitate as I jump in. I am dressing warmly, drinking lots of water, and making effort to be present with an open heart. Looking forward to seeing what happens next.
Posted by cheesemonkeysf at 5:27 PM 3 comments:

I first heard about Nelson Mandela and apartheid at Princeton, but it was not until I was a young lecturer at Stanford that he became real for me.

A national political student movement had started during those years, aimed at educating students at elite private universities to demand that their universities' boards of trustees divest the universities of all their stock in companies that did any business in South Africa.

When we young teachers and lecturers learned about apartheid and about the extent of Stanford's investments in companies that supported and did business with that brutal regime, it simply made sense to us to use our white privilege to speak up and speak out as part of the divestment movement. That was when all of my friends and our students simply held our classes outside the university president's office, in the quadrangle.

Stanford was a pretty conservative university in those days, politically speaking (Condoleeza Rice was the provost!), and so it was only a matter of time before this caught the attention of the regional news media.

Several times a day, the university president had to pick his way through a sea of privileged white kids, sitting on the cobblestones, teaching and learning and protesting peacefully.  And these were not exactly the optics the administration was looking for.

This growing scene helped to create the pressure necessary to bring about Stanford's divestment from South Africa.

It would be almost another ten years before Nelson Mandela would be freed from prison, but it was inspiring to be a part of the divestment movement. At a time when a national motto seemed to be, "Greed is good," it gave me a belief in the power of ordinary good people speaking up peacefully.

Posted by cheesemonkeysf at 6:48 PM No comments: