Something I really did right: Day 1 lesson on really working the rubric

I know I said I was going to go to bed at 8:07, but I wanted to capture and share the essence of something I really did right today in my (mixed 7th and 8th grade) Algebra 1 class.

It was an actual mini-lesson on interpreting -- and more importantly, on using -- the five-point rubric my teammates and I adopted.

Here is my version of the rubric (as a PDF): Rubric handout - Algebra.pdf

WHAT I DID
After the syllabus and the course requirements, I handed out the rubric and had the kids read the bulleted description of each element of a full-credit five-point answer.

We discussed each element, most of which were familiar to all students, but then I really stayed with the topic of "presenting one's work in a neat, organized, and logical manner according to the standards recognized by mathematicians around the world."

My kids are from very varied backgrounds, so we talked about how mathematics has become a lingua franca in our modern world -- so much so that a math teacher in Russia or in Egypt or in India or in Italy could easily read and assess the essence of a math problem written out by a well-trained student who does not speak the same language they do. We marveled at this for a bit (they're very smart and curious middle schoolers!).

Then this was the piece that really pinned the whole thing home.

HAVE THE STUDENTS ASSESS A WORKED PROBLEM USING THE FIVE-POINT RUBRIC
I wrote a very elementary prealgebra problem on the board and told them that the solution I was about to show them was presented on a math assignment turned in by one Hermione Granger. I told them that they were going to have to assess Hermione's work on the problem and justify their score using the rubric we had just reviewed.

Now, of course, being Hermione, she was very meticulous in solving problem #4, showing every step of her work, spacing her work out on the page so that it was easily readable, lining up the equals signs so that equivalence was as visually obvious as it was algebraically.

Then I asked them to give this work a score.

Needless to say, I was dumbfounded.

I then showed how Ron Weasley had approached the same problem. Unfortunately, Ron started by labeling his paper from 1 to 22, and squashed in problem #4 to fit the meager space he had left on the page, writing smaller and smaller until he had to have his solution creep up the right-hand margin of the page toward where the paper was dated in handwriting so cramped it verged on mental-patient scribblings. He circled his answer near the top of the page.

Then I asked them to assess his work using the rubric.

The students had a hilarious time criticizing the insane-looking presentation of the work. Much hilarity was had at poor Ron's expense, which was fine, since he is a fictional character without actual human emotions.

CONSOLIDATION OF LEARNING
To drive my point home, I took Dreikurs' strategy of using natural and logical consequences as a framing device and asked the class about the different choices Hermione and Ron had made in how they presented their work and their answers.

Everybody agreed that Ron had made lazy, poor choices because even though he had arrived at the "correct" answer, he had done so in a way that sabotaged his own efforts to do well in the class.

There was a lot of repetitive, reinforcing discussion of this point and we concluded that in a situation where you have control over choices (such as how to present your work), it would be foolish and short-sighted to sabotage your chance to have your learning be recognized by a scorer just because you're feeling a little inconvenienced.

And THAT was exactly the point I was hoping they would discover for themselves. Low-cost, high-impact point made.

UPDATE: 14-Sep-11
I created a completely generic downloadable version of my 5-point rubric as a PDF which you are welcome to use / steal. It's on the Math Teacher's Wiki at:  Rubric-5-point-generic.pdf
Posted by cheesemonkeysf at 8:52 PM 4 comments:

Email ThisBlogThis!Share to TwitterShare to FacebookShare to Pinterest
Labels: SBG

The Unspoken/Unconscious Curriculum - keeping it both urgent AND important

Setting up my new classroom has caused me to think a lot about what is often called "the hidden curriculum" or "the unspoken curriculum" — the idea that we speak volumes about what value through the unconscious messages we send kids through the way we organize our classrooms, our schools, and our teaching.

Wikipedia has a nice brief overview of the idea of the hidden curriculum:

When I first arrived at my new school and got my classroom, it took me several days to figure out why I felt so depressed whenever I unlocked my classroom. It was only after about a day of taking down the previous occupant's wall hangings that it hit me: everything hanging up was about rules, schedules, and basic skills. Without saying so explicitly in words, it all said, "I the teacher am more concerned with managing your behavior than I am with inspiring your learning." It said, "I too am counting the minutes until the end-of-day bell rings."

It was a big "Ouch" moment.

Now teachers don't do this because they are bad people or boring people. It is simply a conditioned habit of teaching behavior. It's a trance (or a ditch) we've fallen into. But as my mentor always says, "Noticing shifts the energy." And once I've noticed it, I can address it.

So I made a radical U-turn in my classroom design and decorating philosophy. As much as it bothers me to have disorganized shelves and messy cabinets, this both more urgent AND more important: 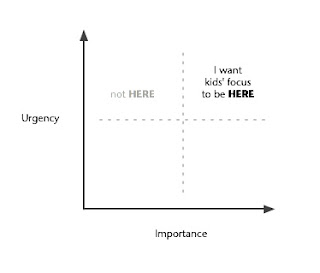 In my classroom, I want students to be focused on things that are both urgent AND important.

I'll add some pictures later but I wanted to get these thoughts down. In the meantime, I'm wondering, what unspoken curriculum is being emphasized in your classroom?
Posted by cheesemonkeysf at 10:12 AM 6 comments:

Posted by cheesemonkeysf at 3:36 PM No comments: