Maybe all of your Algebra 1 students showed up on Day 1 every year with a solid and fluent grasp of basic number sense, but mine sure didn't... and it scared the crap out of me. And then afterwards it haunted me, ALL   YEAR    LONG . . .
The stuff they didn't get was just mind-boggling to me:
I mean, this is basic citizenship numeracy stuff, on the same order as basic literacy.
So since this does seem to be a general condition I am likely to encounter anywhere I am likely to teach, I decided to develop a "Number Sense Boot Camp" unit I could use to start the year off with, diagnose critical number sense deficits, use as an occasion for teaching basic classroom routines, give students a chance to dust off (or remediate) their basic arithmetic skills, and basically give us all a fighting chance of getting to some introductory algebra work.
Another thing that worked this year was stealing adopting game-like practice structures, such as those advocated by Kate Nowak in New York state and by the late Gillian Hatch in the U.K. As Gillian Hatch said, a game can provide "an intriguing context" as well as "an unreasonable amount of practice" in vocabulary, reasoning, procedural skills, generalizing, justifying, and representation than they might otherwise be inclined to do. As Hatch said, it also seems able to lead students "to work above their normal levels." As anyone who has tried any of Kate's practice structures can attest, there is something about introducing this playful element that really gets students to dive in.
IDEA #1
One thing I did this past year that worked for many individual students was to do some specific work with the real number line. I made a printable number line and gave each person their own number line (downloadable from Box.net folder) and a plastic game piece to use with it as a calculating device. 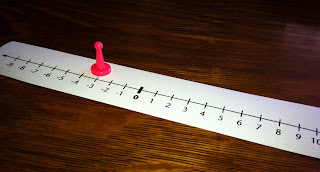 Since the rudiments and rules of board games have such wide currency in our culture, most students found this a helpful physical metaphor that gave them both conceptual understanding and procedural access to basic counting, addition, and subtraction experience that had eluded them in their previous nine to eleven years of schooling.

These had the added benefit of conferring prestige upon those who had shown up for extra help and received their very own set (though I gladly handed them out to anybody who requested one).


IDEA #2
Emboldened by my initial success, I realized could expand the idea of a number line "board game" to use as a basic structure for practice – both in using the number line and in many other basic number sense activities. 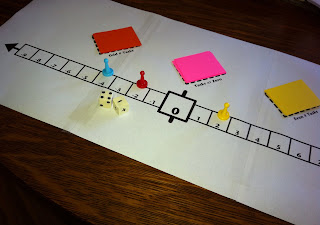 It even dawned on me that this could be made extensible by having different kinds of "task cards," depending on whether a player has landed on an even number, on an odd number, or on the origin (a decent justification for considering even- and odd-ness of negative numbers here ; go argue over there if you have a problem with this).


Players move by rolling one regular die and one six-sided pluses-and-minuses die (+ and –) (kids seem to need grounding in the positive and negative as moving forward and backward idea). Kids earn "points" in the form of game money, which could carry over and be used to purchase certain kinds of privileges (such as a "free parking" pass for a day when they don't have their homework to turn in).
Your thoughts?

UPDATE:
Here are links to the different game boards, along with descriptions of each.
Basic Printable Number Line For Use With a Game Piece:
http://www.box.net/shared/eyy4nvhbtn5xx1qdc9j2

Here is a link to the folder itself if you'd like to share and upload your own documents or samples:
http://www.box.net/shared/ftzkun7cvi5vxgvanvh5

Please share any experience or insights you have with them. Enjoy!


AND FUTHERMORE:
Julia (@jreulbach on Twitter who blogs at ispeakmath.wordpress.com) has started a Number Sense Boot Camp page on the Math Teacher Wiki where you can share and find other Number Sense Boot Camp ideas and activities. Available at http://msmathwiki.pbworks.com/w/page/42105826/Number-Sense-Boot-Camp .


UPDATE - 14-Sep-11:
It's only been one day since I introduced the tournament of "Life on the Number Line" but I am already excited about how well this is working out. It is exposing ALL kinds of misconceptions and misunderstandings about adding a negative and about interpreting negative and positive as movement along the number line. Students are playing individually as a "team," and the team with the highest number of correctly worked problems will win 10 free points (2 problems using the 5-point rubric for each person) on next Friday's unit test.
Since they are surfacing all kinds of misunderstandings about + and - movement on the number line, this is leading to vast amounts of mathematical conversation to get it figured out. So basically, they are teaching each other about adding negatives and subtracting negatives and interpreting that as movement along the number line.
I can see that each day it will make sense to give some daily "notes" at the start of class on clearing up common misconceptions I've seen the previous day in students' work so they can solidify their conceptual understanding as well as their procedural fluency a little more each day.
Best moment yesterday: a girl looked up at me beaming and said, "This is way more fun than doing math!"
I said, "Good!" but I was thinking, "You have no idea how much math you are actually doing!" :-)


And here is a generic worksheet (front and back) you can print out and give to the kids to use as their template:
http://msmathwiki.pbworks.com/w/file/45547628/generic%20worksheet%20for%20Life%20on%20the%20Number%20Line.pdf

If you have only a ton of basic 1-6 6-sided dice, use Post-Its to make two (2) plus-and-minus dice for students to use with one (1) regular numbered die. This is a good task to give to a student helper. ;-)

Thing #2
Right before we started, I had the bright idea to give every group TWO +/- dice and ONE six-sided number die. If you don't mind my saying so, this ended up being a master stroke because it forced students to think about rolling (–)(–)(3) and rolling (–)(+)(3) and every possible combination thereof. This one thing alone might have done the most to deepen their sense of additive reasoning and of +/– as directions of movement.


Thing #3
Here's a link to a zip file that contains ALL of the game cards I created for this unit (on the math teacher's wiki): Game Cards- ALL

For all those who have asked and those who are thinking of asking, I'll say that my school uses the California edition of the McDougal Littell Algebra 1 textbook (by Larson, Boswell, Kanold, and Stiff). For this reason, the game cards are targeted at each of the lessons in Chapter 2. However they are not tied to that textbook and could easily be used with any curriculum or textbook (just sayin').

Thing #4
I'll have to take a photo of the final game boards our instructional aide mounted and laminated for us. They are a true work of art!
Posted by cheesemonkeysf at 1:33 PM