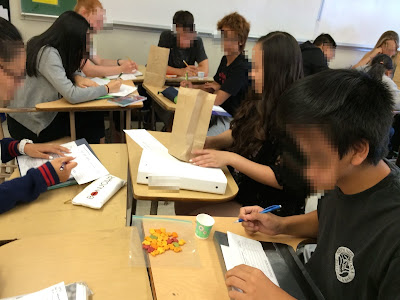 I recently ran Julie's version of Capture Recapture with Goldfish activity with my Algebra 1 classes today. It was a huge hit!

This is a middle school topic, but proportional reasoning is so important it needs to be repeated every year in basic high school courses. Driving past the topics is not supposed to be the point! In HPL terms, I thought of this as an "activate prior knowledge" task that we tried to fit firmly into place with an engaging transfer task.

Julie's recommendation about showing the video is spot on: you absolutely MUST show the video. I broke it down as follows:

We then discussed what was going on (activating prior knowledge about proportional reasoning) and together, we remembered how to do these problems.

Only after we had done our own work to rediscover the mathematics did I show the next 33 seconds of the video:

Together we wrote down all the figures and elements of the problem as Johnny Ball had revealed them so far. Then everybody in our class did their own work to figure out how many ping pong balls they estimated would be in his fish tank.

Once we had done that, then I did the final big reveal:


Once they had seen all of this, it was time for a transfer task.

I had students work in groups, recording their four trials on their data worksheets, taking an average of their estimates for each trial, and finally counting out their exact number of goldfish and writing a summary statement about how close (or far off) they had been. When they were done, they sent a representative to the whiteboard to add their group's data and best estimates to our table of whole-class results.

When we had everybody's data and estimates added to the table on the whiteboard, we discussed how accurate this method seemed and came up with other situations in which this method would be useful.

So connecting proportional reasoning to tangible (and often edible) results in the real world is at least as important as the content of the lesson itself. This goes beyond merely "spiraling" back; it requires integrating into mathematical thinking and problem-solving from each moment forward.

Posted by cheesemonkeysf at 12:14 PM