We also talked about the movement of a function graph across the axis at its x-intercepts — how at certain key transformative moments, a person's life crosses from negative into positive territory -- or it may move in the opposite direction.
A person might be suffering in their life, having a hard time (living in negative territory) until a moment when they win the lottery (which, they were quick to point out, could be either financial or karmic). Suddenly their whole life appears to have shifted its value charge from negative into positive territory. Or a person might be extremely unhappy about their nose or their job, take direct action to make a change, and consequently experience a complete change in their feelings about their whole life, in ways that could be either positive or negative. Or they might be going along feeling pretty good and something goes disastrously wrong, plunging them into negative territory.

The discussion was extremely engaging and it seemed to help them ground themselves conceptually to make their own connection between the idea of intercepting the x-axis and the idea of a character's life shifting from positive to negative value charge or vice versa.

Hands started popping all over the place, so I had them get into pairs and make lists with each other out of their own examples, drawn from novels, movies, and stories in which someone is going along in their life when something changes things from positive to negative or the other way around. Harry Potter's name was invoked. There were a lot of "light bulb" moments all over the room, and it was exciting to see students shift all at once to another level of understanding.

Having developed these ideas, we then got ready to write in the math journal sections of our binders so we could generally try to wrap our minds around the idea of infinity — and of multiple infinities — this wonderful idea of unboundedness, for example, and the fact that infinities can extend in either positive or negative directions along the number line or in the coordinate plane, as well as the idea that they can be relative in size to one another. I told them a little about Georg Cantor's investigations and we discussed how these fit into the historical and cultural context of Romanticism.

On the projection screen, I showed some of M.C. Escher's lithographs that play with ideas of infinity, and they fell in love with this one: 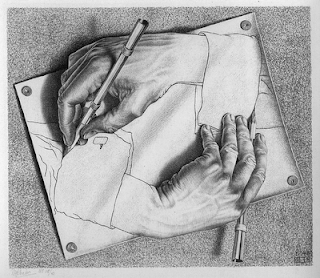 I then asked them to write about their relationship with infinity for five minutes in the math journal sections of their binders.
I was about to turn off the projector but they yelled at me to leave that image up on the screen for inspiration. It stayed up there until the end of the period.
At the end of that unit, I gave this question for extra credit on the unit exam. Some of their writing was incredibly beautiful and insightful.
I could also imagine using some of Vi Hart's videos in this way, especially the opening to her "Infinity Elephants" piece:
Posted by cheesemonkeysf at 11:55 AM